Selling Graeagle real estate is a family tradition that dates back to the year 1962, when Harvey West, Jr. created a beautiful subdivision in Graeagle among the fragrant pine and blue lupine.

Then in 1968, he developed the Graeagle Meadows Golf Course, an 18-hole, par 72 Championship course. Shortly thereafter, the Graeagle Meadows condominium project was developed, and eventually came six subdivisions, public tennis courts and the new town center. In all, the development of Graeagle has been over a 50-year process that is still very much in the making. 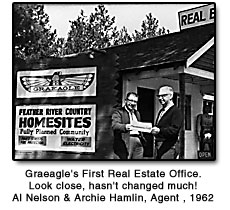 The West family has ultimately developed one of the most well thought out master planned communities found anywhere in the High Sierra.

Since 1962, our reputation of being known as the official real estate sales office in the entire valley has always been exclusively ours. Still located in the exact place, this familiar, little red building is considered Graeagle’s official site to sell premiere real estate throughout the Mohawk Valley.

Visit us and see why we have earned the reputation of being known as The Market Leader in Real Estate.

"Leah and her assistant Gail are as good as it gets. From start to finish they were crazy efficient, always positive and cheerful, and their attention to... continued"
- Will and Janeen V. – Bought a condo in 2019
View All